Effective Use of Resources

The effective and waste-free utilization of limited food resources is a key responsibility of a food manufacturer. Therefore, it is essential to improve supply chains in order to balance sustainable food production with the well-being of many.

The “Effective Use of Resources” is one of our Significant Environmental Initiatives, and the Kewpie Group is addressing it as a priority by striving to effectively utilize unused parts of vegetables and reduce product waste.

We also added the “Realization of a Recycling Economy” as a theme in our Material Issues for Sustainability and are working to reduce and reuse plastic waste.

The utilization of limited food resources is a key responsibility for a food manufacturer. At the Kewpie Group, we have reduced food loss, and we have worked on the effective utilization of resources.

In recent years, food loss reduction has gained further importance, and climate change directly elicits negative impacts on the yield and quality of agricultural products that we use for raw materials, for instance. Moreover, we are committed to meet expectations from our stakeholders, particularly customers, who are increasingly concerned with food loss reduction. 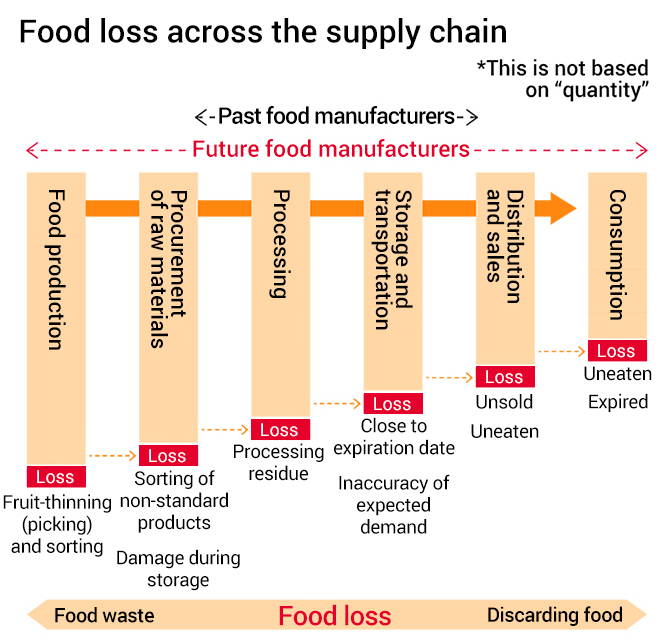 We are striving to contribute to the goals set by the SDGs with our “Curtailment of food loss(Reduction of product waste)” Sustainability Target.

Product waste is mainly caused by a discrepancy between production (based on estimated demand) and actual sales, or from products that were unsold and returned during distribution. At the Kewpie Group, we strive to address this issue by not only coordinating across companies and departments, but also actively donating to foodbanks.

Furthermore, when Kewpie organized a community event, we cooperated with local social welfare organizations and NPOs to hold a food drive and asked residents to bring food products that were lying unused at home. It was a great opportunity to raise awareness for household food loss not only among our employees but also the local consumers.

A working group with the objective of reduction in food loss that integrates production, sales, and distribution

Since 2015, related departments hold a working group every month. At this working group, we focus on “product inventory” and discuss various issues and solutions surrounding production to distribution. Thanks to such monthly engagement, we have seen a consistent rise in the awareness of food loss within the company. Furthermore, outside our Group, drug stores and restaurant companies have agreed to join our initiatives for food loss as the concept of the SDGs has also become commonplace across industries.

The Kewpie Group is engaged in the reduction of waste generation as a top priority, through improvements in production yields in manufacturing processes and improvements in containers and packaging. 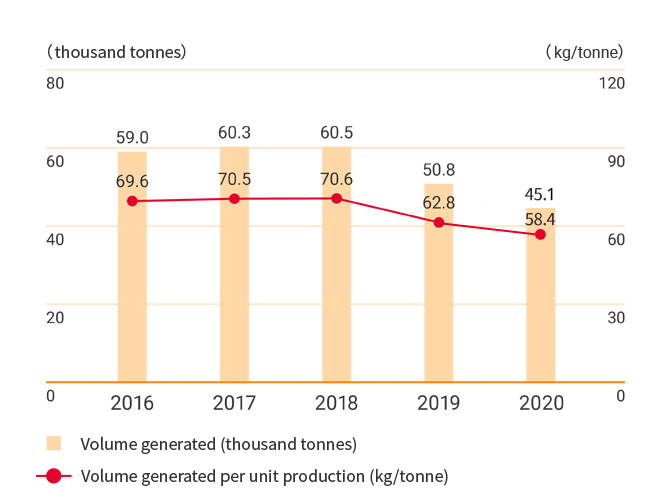 *Excludes bi-products that are recycled within the Group, e.g. eggshell powders.

*The significant decline can be attributed to the partial disposal of the salad and delicatessen sector by sale.

The Kewpie Group products a variety of processed egg products besides mayonnaise. 10% of the eggs produced in Japan are used by the Kewpie Group.Kewpie Mayonnaise is made with the egg yolks, and the whites are used as food ingredients in processed seafood paste products such as kamaboko, and confectionery products such as cakes.The approximately 28,000 tonnes of eggshells generated annually are also put to effective use in soil improvement agents, an additive for calcium-enriched foods, and other products, with 100% of eggshells being recycled. We are also working on advanced uses for eggshell membranes, such as in cosmetic products. 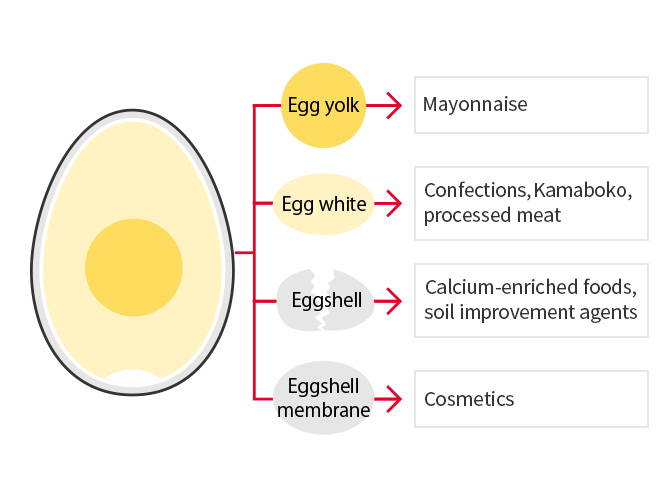 Effective use of eggs

The Kewpie Group is conducting a joint research on the value of egg shells as fertilizers with Professor Yoshimasa Tsujii and Associate Professor Taku Kato from the Faculty of Applied Biosciences at the Tokyo University of Agriculture. So far, we have been able to determine that adding egg shell fertilizers to rice paddies reduces the effects of unseasonal weather, such as extreme heat, on the rice. This improves harvest yield and enhances rice quality. Since rice makes up most of Japan’s crop acreage*, we are hopeful that egg shells can be effectively utilized in the future, not only by the Kewpie Group but also across the whole country.

Furthermore, a separate joint study conducted with the National Institute of Nutrition in Hanoi, Vietnam revealed that calcium from egg shells (biomaterial consisting mainly of calcium carbonate from egg shells finely ground for eating purposes) improves bone density in humans. This shows that egg shells can contribute to resolving the global issue of osteoporosis (bone weakness) that is emerging as the population ages. In Vietnam, we are currently selling a nutritional supplement product that contains egg shell calcium while also working to raise awareness and propose the solution to schools and medical facilities. In this way, we are striving to improve children’s physical build and resolve the issue of osteoporosis among the elderly.

*Based on the 2018 statistics from the Ministry of Agriculture, Forestry and Fisheries on the aggregated planted (growing) area of agricultural crops and utilization rate of cultivated land

Our challenge going forward is to uncover the full potential of egg shells.

We believe calcium, which is the main component of egg shells, not only strengthens each of the cells in a plant but also facilitates various bioactivities within the cells. Meanwhile, global climate change is triggering extreme heat to such extents that even humans are having a hard time coping. This heat is one of the causes behind reduced rice harvest. We believe the calcium from egg shells can prevent heat exhaustion in the rice and stabilize harvests. Our challenge going forward is to uncover the mechanism behind this. 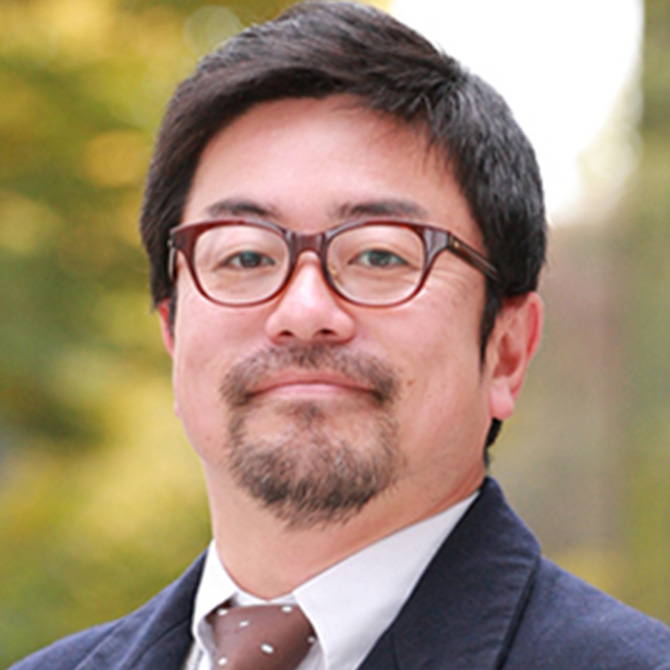 Using methods developed by Kewpie, we successfully separated eggshell membranes from egg shells. We discovered that water soluble eggshell membranes can increase type III collagen, which makes skin more smooth and supple. As such, we have been utilizing it as a raw ingredient for cosmetics since 1991.

Kewpie Jyozo Co., Ltd. developed and distributes a calcium fertilizer called “Yokatsusu,” which is made by dissolving egg shells in vinegar.

Regularly spraying the fertilizer on the leaves of vegetables, fruits and flowers prevents calcium deficiency and allows the plants to grow healthily.

Since the product is derived from food products, it is both human and environmentally friendly and can be used without concern.

1956: Began sun-drying egg shells and selling them to farms as soil conditioner

1991: Processed eggshell membranes and began selling them as a raw ingredient for cosmetics

2019: Our egg shell initiatives won the “3Rs (Reduce, Reuse, and Recycle) Promotion Merit Awards” for the Minister of Agriculture, Forestry and Fisheries Award

At the Kewpie Group, we use plastic for food containers and packaging. Indeed, plastic is useful for its advantage in lightweight and durability, though negative environmental impacts, such as marine plastic litter, are also severe.

At the Kewpie Group, we recognize the enormous impact that plastic has on ecosystems and the environment as a significant issue. Therefore, we will further commit ourselves to reducing the use of petroleum-derived plastic.

In February 2020, we began to use recycled plastics for part (approx. 15%) of the outer packaging of stick type dressings.

Added to your cart: