In the 1910s, Kewpie founder Toichiro Nakashima traveled to the United Kingdom and the United States as an overseas intern for what was at that time the Japan Department of Agriculture and Commerce. He returned to Japan having developed a fascination with the delicious flavor of orange marmalade and nutritional value of mayonnaise used in potato salad. In 1925, based on his desire to “help improve the physiques and health of Japanese people by making delicious, nutritious mayonnaise so widely available that it becomes a daily necessity,” the Company launched KEWPIE Mayonnaise, a highly nutritious egg-yolk type mayonnaise.

Since its founding in 1919, Kewpie has continued to value our founder's “desire to contribute to the health of customers.” Going forward, we will continue to honor this founding ambition with the aim of becoming a Group contributing to the food culture and health of the world through “great taste, empathy, and uniqueness.” 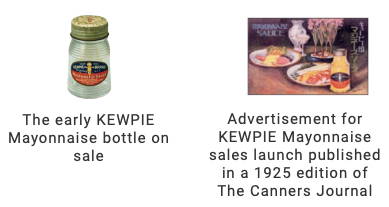 KEWPIE Mayonnaise production halted due to difficulties in obtaining the ingredients during the war. 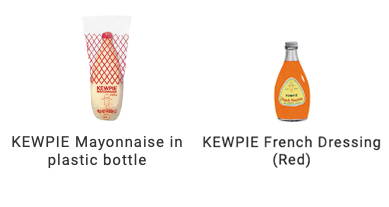 Promoted to the First Section of the Tokyo Stock Exchange.

Shibuya Head Office (Shibuya-ku, Tokyo) rebuilt, which then designated as a base of operation for head office and sales divisions.

Added to your cart: